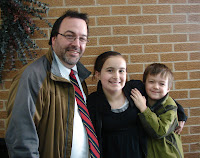 Our Speaker during Family Bible Hour was Mr Donnie Patten of Emmaus Bible College (shown on the left, with his two children).  He gave us his insight on the life of King Saul.  King Saul was chosen king mostly because of his looks (...from his shoulder and upward he was higher than any of the people...  1 Samuel 13:9).  The bottom line -- King Saul relied on his own power as king of Israel. His life is a sad commentary on one who had it all, but did not rely on God.  In contrast, Saul's son, Jonathan,  relied on God's power.  He had a theology of the impossible; he believed that God is able, with little or with much!

And Jonathan said to the young man that bare his armour, Come, and let us go over unto the garrison of these uncircumcised:  it may be that the Lord will work for us:  for there is no restraint to the Lord to save by many or by few.  And his armourbearer said unto him, Do all that is in thine heart:  turn thee, behold I am with thee according to thy heart.  Then said Jonathan...if they say thus, Come up unto us; then we will go up: for the Lord hath delivered them into our hand:  and this shall be a sign unto us...And that first slaughter, which Jonathan and his armourbearer made, was about twenty men, within as it were an half acre of land, which a yoke of oxen might plow...(1 Samuel 14).

The full message, in context, is available on DVD
Please see Romy.
at 10:33 PM No comments: 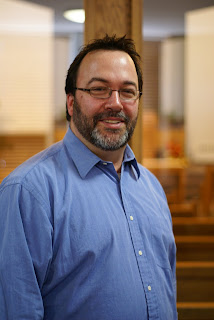 Our Speaker during Family Bible Hour was Mr Donnie Patten of Emmaus Bible College.  His message was based on John 6: 22-51 and centered on the meaning of Jesus as the Bread of Life. These passages speak of Jesus' ability to get to the real issue of people's unbelief or lack of faith;  the Holy Spirit's work in drawing people to Christ; and the tremendous security of the believer of Christ.
Verses 25-34 was a message to unbelievers :

..Verily, verily, I say unto you, Ye seek me, not because ye saw the miracles, but because ye did eat of the loaves, and were filled.  Labour not for the meat which perisheth, but for the meat which endureth unto everlasting life, which the Son of man shall give unto you:  for him hath God the Father sealed... This is the work of God, that ye believe on him whom he hath sent...


...Verily, verily, I say unto you, Moses gave you not that bread from heaven; but my Father giveth you the true bread form heaven.  For the bread of God is he which cometh down from heaven, and giveth life unto the world...I am the bread of life:  he that cometh to me shall never hunger; and he that believeth on me shall never thirst...And this is the will of him that sent me, that every one which seeth the Son, and believeth on him, may have everlasting life:  and I will raise him up at the last day...

Verses 43-51 was addressed for us today:


...No man can come to me, except the Father which hath sent me draw him:  and I will raise him up at the last day...Verily, verily, I say unto you, He that believeth on me hath everlasting life.  I am that bread of life...This is the bread which cometh down from heaven, that man may eat thereof, and not die.  I am the living bread which came down from heaven:  if any man eat of this bread, he shall live for ever:  and the bread that I will give is my flesh, which I will give for the life of the world.

Mr Kuklinek is the leader of the Education programs for the "Josiah Venture" Their goal is supporting and equipping Christian Leaders in the Czech Republic and Eastern Europe.  Did you know that 90% of Czechs are atheists?!!  Brothers and Sisters, let us get on our knees before the Lord  that He may send  labourers in this vast field.
at 10:29 PM No comments:

Our speaker during Family Bible Hour was Mr Stefan Johnson, shown in the picture with Mr Moorhouse.  Mr Johnson  asks that we pray that students who should be at Emmaus Bible College, be obedient to the Lord's will and attend  Emmaus Bible College.   His message was based on John 19: 16-42:    Then delivered he him therefore unto them to be crucified.  And they took Jesus and led him away.  And he bearing his cross went forth into a place called the place of a skull, which is called in the Hebrew Golgotha:  Where they crucified him, and two other with him, on either side one, and Jesus in the midst...

Jesus died on the cross for our sins.  His death, witnessed by others, is in fulfillment of scripture.  It is the only answer to the human problem of original sin.  Therefore, we should be confident, and as Peter wrote in 1 Peter 3: 15
...be ready always to give an answer to every man that asketh you a reason of the hope that is in you with meekness and fear...


Mr Johnson's message, in full and in context, is available on DVD.
Please see Romy. 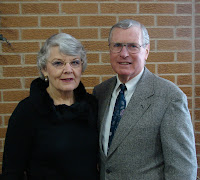 Our speaker during Family Bible Hour was Mr Harry Williams. He and Mrs Williams are currently living at Windsor Park Retirement Community, and are thankful to God for providing for their needs. His message was based on 1 Thessalonians 5: 18 --

In everything give thanks:  for this is the will of God in Christ Jesus concerning you.


Now Naaman, captain of the host of the king of Syria, was a great man with his master, and honourable, because by him the Lord has given deliverance unto Syria:  he was also a mighty man in valour, but he was a leper.  And the Syrians had gone out by companies, and had brought away captive out of the land of Israel a little maid; and she waited on Naaman's wife.  And she said unto her mistress, Would God my lord were with the prophet that is in Samaria! for he would recover him of his leprosy.  And one went in and told his lord, saying, Thus and thus said the maid that is of the land of Israel.  And the king of Syria said, Go to, go, and I will send a letter unto the king of Israel.  And he departed, and took with him ten talents of silver, and six thousand pieces of gold, and ten changes of raiment....


From the passage above, we learn that the best example of being the most thankful was the little, captive girl.  She is the best example because of the following reasons
For the full, excellent message in context, please view the DVD.
For more information, see Romy.

We warmly welcome into our midst, Bevita. She is shown in the picture below with her Mother-in-law, Leela.   Bevita  is the wife of Leela's son, Renjith Samuel. 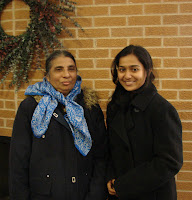