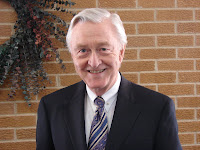 Our speaker during Family Bible Hour was Mr David MacLeod from Emmaus Bible College. It is always a pleasure to have Mr MacLeod  visit our congregation.  His message was based on Revelation 6:1-8:

1And I saw when the Lamb opened one of the seals, and I heard, as it were the noise of thunder, one of the four beasts saying, Come and see.
2And I saw, and behold a white horse: and he that sat on him had a bow; and a crown was given unto him: and he went forth conquering, and to conquer.
3And when he had opened the second seal, I heard the second beast say, Come and see.
4And there went out another horse that was red: and power was given to him that sat thereon to take peace from the earth, and that they should kill one another: and there was given unto him a great sword.
5And when he had opened the third seal, I heard the third beast say, Come and see. And I beheld, and lo a black horse; and he that sat on him had a pair of balances in his hand.
6And I heard a voice in the midst of the four beasts say, A measure of wheat for a penny, and three measures of barley for a penny; and see thou hurt not the oil and the wine.
7And when he had opened the fourth seal, I heard the voice of the fourth beast say, Come and see.
8And I looked, and behold a pale horse: and his name that sat on him was Death, and Hell followed with him. And power was given unto them over the fourth part of the earth, to kill with sword, and with hunger, and with death, and with the beasts of the earth.

Conclusion:
(A) The passage above teaches us about  the absolute sovereignty of God.  He is using the Antichrist to bring judgement to the world
(B) The Antichrist is the ultimate picture of modern man, totally wrapped-up in himself. Sadly, the self-defeating character of sin is revealed
(C) Let us never forget that the work of the Lord Jesus Christ is not only about redemption, but also about judgement.  The Cross is divine wrath revealed.  The one who does not believe is condemned already (John 3:18)
(D) God reveals what this vain, guilty, proud world is coming to.  The end is destruction.  Flee from the wrath to come. Flee to the arms of Jesus Christ through whom we have forgiveness for our sins.

Mr MacLeod's message, in full and in context, is available on DVD. Please see Romy.
at 11:58 PM No comments:

Psalm 73: The prosperity of the wicked 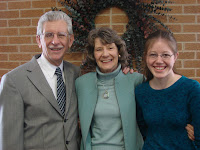 Our speaker during Family Bible Hour was Mr Charlie Fizer.  He is shown in the picture with his wife, Darlene, and Helen's granddaughter, Celeste. Mr Fizer's message was based on Psalm 73:

Truly God is good to Israel, even to such as are of a clean heart.
2But as for me, my feet were almost gone; my steps had well nigh slipped.
3For I was envious at the foolish, when I saw the prosperity of the wicked.
4For there are no bands in their death: but their strength is firm.
5They are not in trouble as other men; neither are they plagued like other men.
6Therefore pride compasseth them about as a chain; violence covereth them as a garment.
7Their eyes stand out with fatness: they have more than heart could wish.
8They are corrupt, and speak wickedly concerning oppression: they speak loftily.
9They set their mouth against the heavens, and their tongue walketh through the earth.
10Therefore his people return hither: and waters of a full cup are wrung out to them.
11And they say, How doth God know? and is there knowledge in the most High?
12Behold, these are the ungodly, who prosper in the world; they increase in riches.
13Verily I have cleansed my heart in vain, and washed my hands in innocency.
14For all the day long have I been plagued, and chastened every morning.
15If I say, I will speak thus; behold, I should offend against the generation of thy children.
16When I thought to know this, it was too painful for me;
17Until I went into the sanctuary of God; then understood I their end.
18Surely thou didst set them in slippery places: thou castedst them down into destruction.
19How are they brought into desolation, as in a moment! they are utterly consumed with terrors.
20As a dream when one awaketh; so, O Lord, when thou awakest, thou shalt despise their image.
21Thus my heart was grieved, and I was pricked in my reins.
22So foolish was I, and ignorant: I was as a beast before thee.
23Nevertheless I am continually with thee: thou hast holden me by my right hand.
24Thou shalt guide me with thy counsel, and afterward receive me to glory.
25Whom have I in heaven but thee? and there is none upon earth that I desire beside thee.
26My flesh and my heart faileth: but God is the strength of my heart, and my portion for ever.
27For, lo, they that are far from thee shall perish: thou hast destroyed all them that go a whoring from thee.
28But it is good for me to draw near to God: I have put my trust in the Lord GOD, that I may declare all thy works.

Mr Fizer's message answers the ageless question of why the wicked prosper.  His message is available on DVD.
Please see Romy.